It's Hard to Believe!

Over the past weekend Tim and I went to the Paso Robles Home and Rec show. I was excited to go but Tim was dragging his feet wondering what on earth we needed for our home. I just wanted to browse the different vendors and sign up for all the contests. Every home show has tons of contests. So the grand prize contest was a 4 day trip to Vegas in some fancy hotel. We of course signed up. We filled out our ticket stub with our name and phone number and took the other half of the ticket, in which they mentioned that we should be sure to keep in case we won. Well, I put Tim in charge of the multiple tickets that day for all of the various contests we were entering. (Some of you can see where this is going)

Well, we waited for any phone calls after the drawing on Sunday and didn't get a single one. No big deal, I have never won a contest in my life. Didn't think this would be the one. Well on Wed afternoon they called and left a message saying that we had won the grand prize Vegas trip! I was so excited! If you know me, you know how sometimes when I get excited I have these loud outbursts of sheer joy! I would have been one of those great radio winners that goes crazy on the other end of the line while they are on the radio.

Well there was one small detail. The message said for us to call the lady back so we could redeem our prize. So, my next question for Tim is, "where are our tickets we were supposed to save?" We need to redeem our prize. Tim then mentions that he didn't think we were going to win and it had been 4 days so he threw the tickets away! My outburst of joy quickly turned into an outburst of "you've got to be kidding me!!!!" Tim quickly replied that he knew exactly which trash can he put them in. My next response was, "oh you mean the trash cans that were emptied last night and the trash man took away this morning!!!"

So we debated all night. Would they give us the trip? I mean they had our name and phone number.. They had to give it to us right? So Tim's job this morning was to convince the lady that tickets or no tickets she had to give us the trip. I was anxious at school today to find out the answer.

At lunch time I walked into the office at school to find flowers sitting on the counter waiting for me. This was a great surprise and I had two things running through my head. Number 1: either these flowers were from Tim saying he was extremely sorry he did everything he could but we needed the tickets he threw away, or Number 2: We were going to Vegas!

I opened the card in anticipation and it read:
Pack your bags! We're going to Vegas!

Whoo hoo! Now I can never say I havn't won anything again. The funny thing is people are starting to tell us that they are hearing our name on local radio stations congratulating us.
Posted by Tim and Debra at 5:30 PM

Congrats! Love what you did with your landscape too. We will have to visit soon. :) 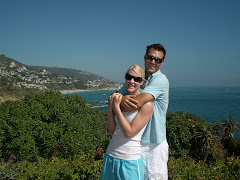